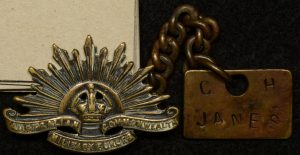 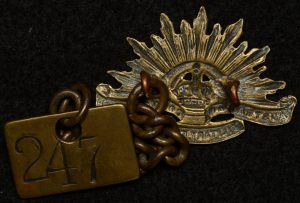 Unofficial Australian ID tag, rectangular 26mm wide by 16mm high and appears to be made from brass. Both sides stamped with punches, one side reading “CH JANES” and the other “246”. Tag is holed and a base medal chain connects the tag to a brass collar sized Australian Rising Sun badge. The Rising Sun has no maker’s mark.

Charles Henry Janes a 27 year old salesman enlisted on 26 May 1915 at Liverpool in Sydney. He shipped out of Australia on the 16th of August 1915 and joined the 17th Battalion at Gallipoli in September 1915. Janes survived the Dardanelles and arrived in Alexandria, Egypt in January 1916. He seems to have fallen sick at least twice in the following three months before being transferred to the 53rd Battalion at the Australian training camp of Moascar in North Africa. Janes attended the School of Instruction at Ismailia in April and May 1916 before being promoted to Sergeant and being assigned to a machine gun section. June 1916 saw him leave the training camp for Alexandria, and from there he left for Marseilles arriving on 28 June 1916. Just 21 days later he was reported as missing in action on 19 July 1916 before finally being found to be killed in action at a court of enquiry in September 1917. Sergeant Charles Henry James, born in Bedfordshire, England was one almost 2,000 Australian soldiers who died on 19 June 1916 at Fromelles, near Aubers Ridge in French Flanders.

You can view the service records of Charles Henry Janes, 246 on the National Archives of Australia here.