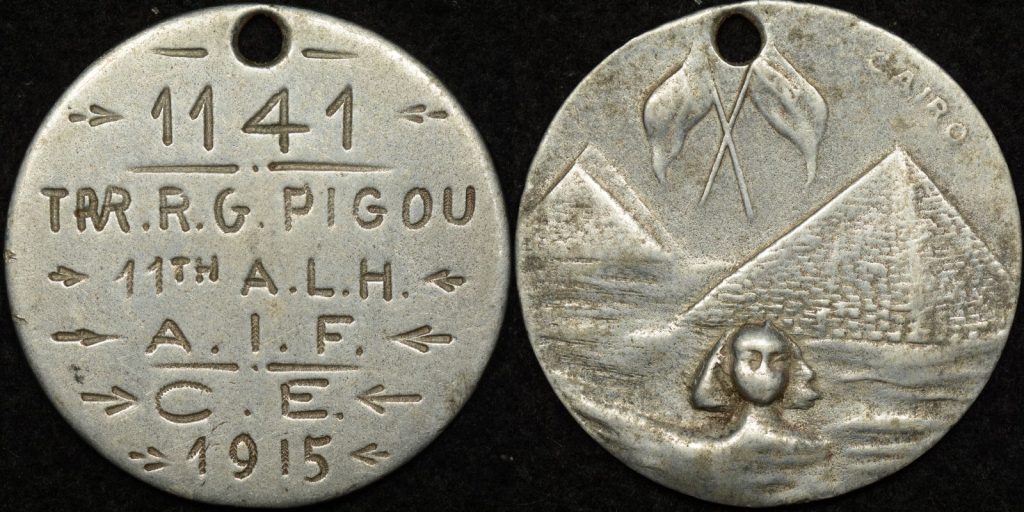 Unofficial World War 1 AIF ID tag made from white metal Cairo souvenir medallion. One side shows the Egyptian Sphinx with two pyramids behind and crossed flags above. The word “CAIRO” is visible at the top and the medallion has been holed. The other side is neatly engraved with “wiggle-work” and reads:

Reginald Gambier Pigou of Alberton, a suburb of Adelaide, enlisted at Keswick on July 7 1915 when he was 18 years old. He was taken into the strength of the 5th reinforcements for the 11th Australian Light Horse Regiment. Pigou shipped out of Australia in September 1915 for Egypt. In January 1916 he was transferred to the 9th Australian Light Horse Regiment and spent the next several months transferring to hospital and among various squadrons of the 3rd Australian Light Horse Regiment. In November 1916 he was taken on strength to the 4th Australian Camel Regiment in Abbassia, Egypt. Somewhat colourfully his service record notes that he was caught in a brothel on New Years Day, 1917 for which he receieved two days of field punishment. In February he was transferred to the 18th Company of the Imperial Camel Corps. In April 1916 Pigou transferred to hospital with Haematuria (blood in the urine) caused by bilharzia or an infestation of blood flukes. Pigou remained in hospital for a month before being returned to Australia in late May. He was discharged from the AIF in November 1917.

Pigou got engaged to Vera Marshall of Wasleys, SA in 1919 and they had at least one daughter (Doreen) in 1922. No concrete record of the fate of Reginald Gambier Pigou can be found past that point.