Interesting World War 1 AIF Identity Disc crafted from a 120 Grana from Naples (Italian States). Very unusual to see an ID disc on a crown sized silver coin, and especially so on an obscure coin like this.

Obverse is very neatly engraved with:

Theodore Bertram Armfield enlisted on 8 September 1915 in New South Wales into the 14th Reinforcements, 9th Battalion. He was shipped in Egypt in March 1916, then to Marseiiles on 26 May 1916, then to Etaples on 25 June, and finally joined the 9th Battalion in the field on 10 July 1916,. On 12 July he was transferred from the 9th Battallion to the 1st ANZAC Entrenching Battalion. Just 11 days later Armfield was killed in action at Pozieres on 23 July 1916. You can view Theodore Armfield’s service record here. 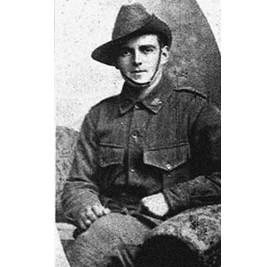