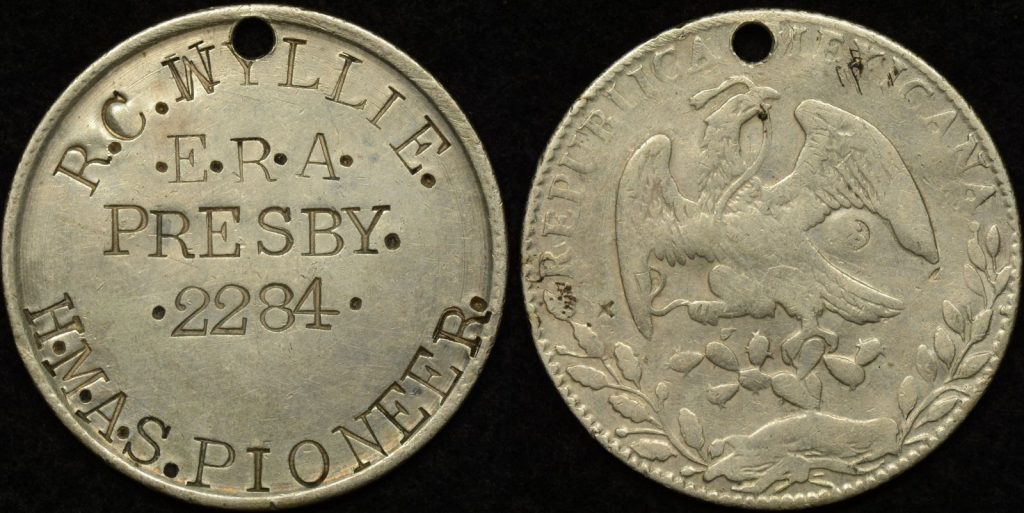 Made from Mexican “Cap and Rays” 8 reales with obverse neatly lathed out and stamped with:

A couple of Chinese trader chopmarks present on reverse. Holed for suspension.

Robert Wyllie was born in Scotland in 1887 and enlisted in the Royal Australian Navy on 13 August 1912. He served until December 1919 when he was invalided out of the RAN. His records contain sparse information except for two key events. The second, was an accident on the HMAS Brisbane where he was an ERA (Engine Room Attendant). The accident neccesitated the amputation of one of this hands.

The first key event is that Wyllie served on the HMAS Pioneer from 15 December 1913 until 5 October 1915. The HMAS Pioneer was part of the First Australian Convoy to the battlefields of Europe. Engine trouble meant she was returned to Fremantle in WA and missed the HMAS Sydney’s encounter with the German light cruiser, SMS Emden. She left Fremantle in January 1915 and sailed to the Cocos Islands. While there her crew inspected the wreck of the SMS Emden on North Keeling where it beached after being destroyed by the HMAS Sydney the preceding November. The SMS Emden contained many thousands of coins including more than 6,000 Mexican Cap and Rays 8 reale coins. The majority of these were recovered in salvage operations and presumably the crew of the HMAS Pioneer took it upon themselves to souvenir a few coins while they were inspecting the beached wreck.

Robert Wyllie was serving on the HMAS Pioneer while the crew inspected the SMS Emden so it’s more than likely that this impromptu Naval ID disk is made from one such coin salvaged from the SMS Emden, making it an unusual item indeed.

The HMAS Pioneer was scuttled off of Sydney in the 1931 after she was de-commissioned.